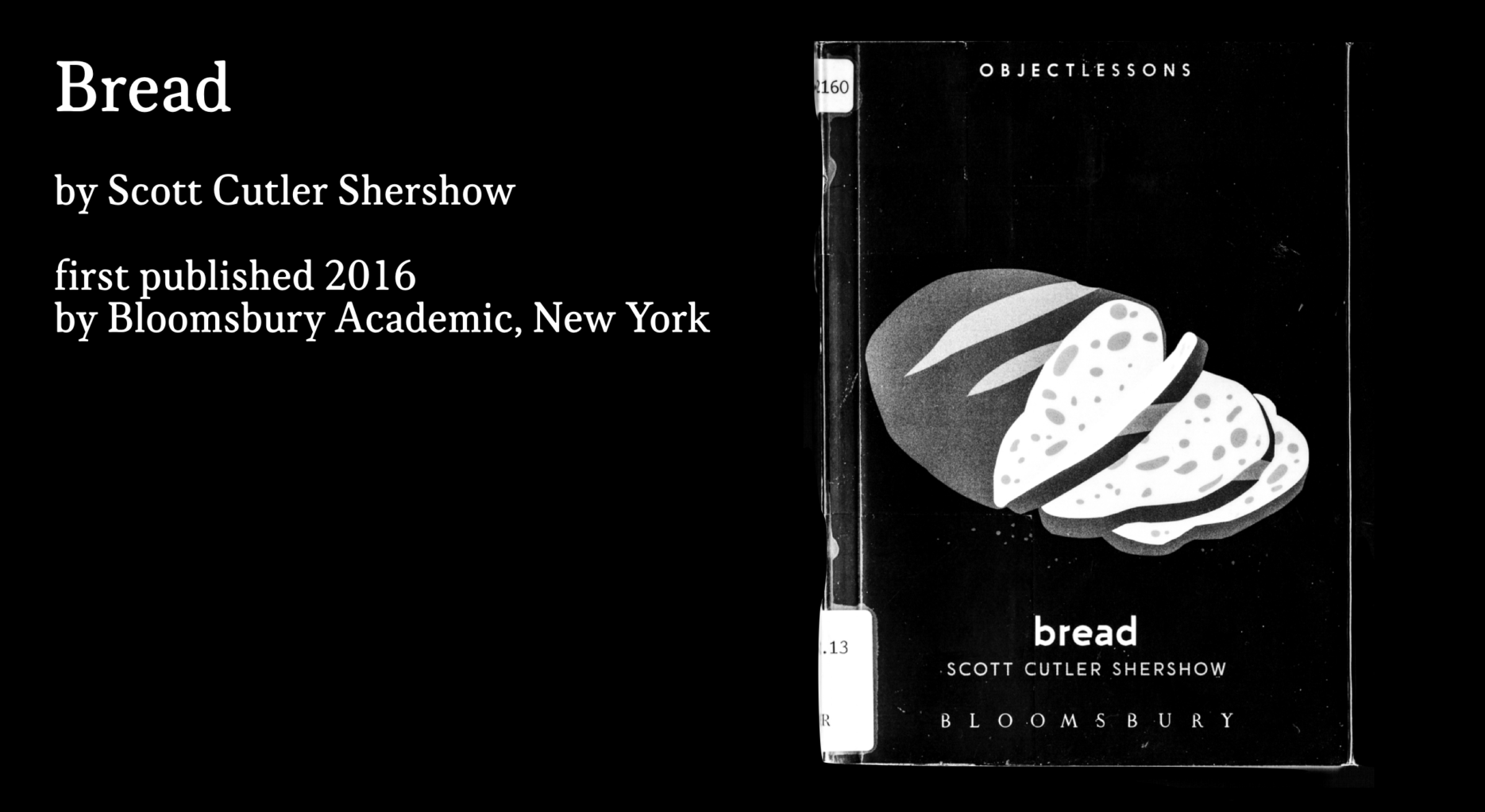 “Bread”, first published 2016 by Bloomsbury Academic, New York, in the series Object Lessons – a series about the hidden lives of ordinary things.

Object Lessons is a series of 47 books and essays about the hidden lives of ordinary things, published by the newspaper The Atlantic and publisher Bloomsbury Academic. Object Lessons are self-initiated essays or books.

Scott Cutler Shershow, born in 1953, with a BA from Yale, and an MA and Ph.D. (1983) from Harvard, is a professor of English at the University of California, Davis. His academic work relates to the fields of Critical theory and literature studies.
He wrote the book from a political position as American, white, male, 63 old academic and amateur baker.

In the book, bread is considered as an object that is always in the process of becoming something else. The author conducts an exploration of the many meanings of bread considering its philosophy, history, sociology, theology and biology.

Bread is presented as a material object, symbol and system that is always in the process of becoming and has an in-betweenness and transformative power.

In chapter 1, titled Bread book, Scott Cutler Shershow outlines the deconstruction of bread throughout the chapters of the book. He speaks about his love for bread as a love of the alien and briefly touches on different angles to reveal the inherent strangeness of “the alien” within.

Chapter 2, Bread dance, points out the baking process as a radical transformation through labor. Shershow sees an analogy in the process of bread making and in the contrasting forces of Greek tragedy, Dionysian ecstasy (chaos) and Apollonian harmony (order). He envisions “bread as a sort of Apollonian monument rising out of the Dionysian swamp of the dough.

In chapter 3, Bread flower, Shershow considers the ingredients of bread, describing wheat as a material being shaped by human labor. He describes bread as an indicator of privilege and wealth, a signifier of social class. He makes a brief connection to contemporary so-called artisanal loafs as an unattainable luxury for some.

In chapter 4, Bread dread (1), he describes a mutual dependency between him and the culture as an alien being, that on the one hand is being exploited, and on the other can not be controlled fully. Most of the chapter he speaks about negative associations of fermentation in Judaism and Christianity (as a sexual metaphor, transformative power or contamination), and its demonization in America after Louis Pasteur’s discovery of microbes.

Chapter 5, Bread breakings, is devoted to the philosophical paradox of the “whole and the part” evoked by the experience of bread. Following are etymologic explorations of words like “sharing” or “a part” whose origins lie in the word ”bread”.

Chapter 6, Bread line, offers different historical perspectives on bread becoming a means of power or a catalyst for resistance. He points out the power of bread or no-bread, its absence: to starve, suppress, denounce and pressure certain social groups (the bakers and millers) during famines, and on the other hand unite, visible in bread riots and revolts.

Chapter 7, Bread dread, is a chapter that scrapes on the surface of a contemporary position towards bread. He gives an opinionated overview over the emergence of agriculture, its industrial acceleration and today’s super-symbolic production, in order to contradict claims of certain bread-condemning diets, summarizing these movements as narratives striving for “the myth of the golden age, the good old days, the long-ago past in which things were how they should be instead of how they are.”

Chapter 8, Bread/dead, starts with semantic observations of the word “bread” relating to death. Bread is life, no-bread is death. To close, he tries to point out the fact that in order to produce bread, there is the need to kill first (the yeast, the wheat plant).

In chapter 9, Daily bread, Shershow relates bread to biblical texts, where the term is used to signify the “necessary” or “continuous” feeding of people. He wraps up, locating bread as an object and an idea between material and symbol, the profane and the sacred. He declares the book as essentially unfinished, as the subject is always in process and therefore “never one, but always many”. (p. 131)

What do I agree with?

What do I disagree with?