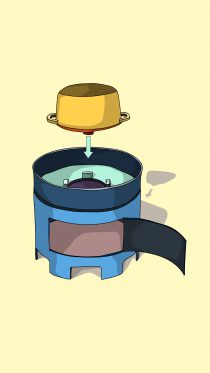 An oven from a designer‘s perspective

It was clear to him from the beginning that it was not going to be an easy undertaking. When his proposal had been chosen, he was also made responsible for its implementation. He was to lead a workshop to build an oven in which bread could be baked for 100 people. On top of that,  this oven should be on wheels.

The whole thing would take place during a one-week workshop on the site of a temporary neighborhood project. When the email came asking for detailed material requirements, his joy was quickly overshadowed by a dull feeling of responsibility and piercing insecurity.

He oversaw the terrain, with kitchen tent, sleeping tent, community area and workshop, humming with people. Today was the last day of the project, pride and a newly won security flowed through him. Now, for him the simplest part would come.

With a satisfied smile on his face, he looked at the bucket, the contents of which had more than doubled in the last hour. Flour sacks and water canisters, bread baskets and scales were lined up on the wooden workbenches. Firewood was piled up. A warm, spicy smell of coffee was running through the garden from the food tent.

Soon a large group gathered around him. The ingredients, seemingly so simple, were a universe for him. With wild gestures he made declarations of love to the leaven. In a choreography of movements, he showed them how to knead the dough with a firm grip, he worked it machine-like. He embraced the sticky mass with his hands until a smooth and tender dough was forming, reached into the flour sack and created a cloud of fine flour dust.

The oven stood, jacked up in the middle of the community area; they had built it in a very short time, helped through the collective knowledge of all participants. Over the next five years, it was to continuously change its location and bake bread together with people from different neighborhoods.

An oven from a user‘s perspective

He pressed the still warm bread to his chest, stuck his nose into the package, closed his eyes and sucked in the sour-sweet smell on the bread‘s surface. He pushed his flat hand from the outside against the bread and, smiling contentedly, felt the fine cracking of the crust.

It all began with his involvement in the construction of a neighborhood breadoven. Initially, this was not out of interest in the function of the oven, but out of a desire to play a more active role in the neighborhood. He made the decision to bake his first bread much later. What came out of the hot throat of the transporter-sized oven, rusty, almost black, crackling, was bread as he had never known it before.

Smiling, he thought back to his feelings when they had heated the oven for the first time. He had been involved in building this wondrous machine, which could generate temperatures without gas or electricity, that seemed perfect for turning a sticky gluten scaffold into a juicy crumb with a crunchy crust. Wasn‘t it fascinating how nothing but flour dust, a dash of water and a little salt could become a complex taste experience?

When he had started baking bread, he did it without further ado and without great aspirations. Although the results were worlds away from what he could find in the expensive bakeries, he felt an indescribable satisfaction and pride in eating his bread. He assured everyone who wanted to hear it that it was the best bread he had ever eaten.

Baking bread took time; it was time he spent for others. It filled him with a sense of lightness and freedom when he gave his bread as a present to friends and family. Whenever he opened the stove, the smell of baked time came out towards him.

An oven from the oven’s perspective

It was the smell that made people stream in from all directions. Just as they had been pouring into the Climate Camp from all over Europe for several days, they were now magnetically attracted by the trailer with the front tent. The mobile bread oven had arrived.

The bread oven, an unlikely luxury in a temporary environment subject to daily change, was located in the center of a wildly scattered tent city. It persistently emanated a sweet-warm odor that soaked the earthy, humid air. A thin chimney tirelessly spewed clouds of smoke into the ashen sky that spanned the tent city on the edge of an eerie crater. Humid cold nights and a constant readiness to move, paired with exhausting attemps to halt the brown coal production, made the everyday life of the activists a physical and mental effort.

Since its arrival, the kiln had been in operation immediately and uninterruptedly. It seemed almost magical that this barrel-shaped, black cylinder could conjure bread for 3000 climate activists. Several hundred kilos of flour, water and firewood had arrived with the provisional bakery. At night, the flickering glow of the flames illuminated the faces of those who had come to find warmth and fellowship.

The daily interventions of the police and security forces spoiled any sense of security and comfort for the people in the camp. After hours of sit-in strikes in the coal-dusty air, the activists found a counterpole to the stresses and strains at the oven, a space beyond protest and activism. The oven spoke a language that was understandable to everyone. Its position as a centerpiece of the camp produced a temporary village square, a place for contact and exchange.

Although by no means climate-friendly or thematically positioned itself, it acted as a constituting infrastructure to create peace and warmth, community and well-being in a hostile environment. Because of the context in which it operated, the seemingly neutral bread oven established itself distinctly in a position of political ideals.